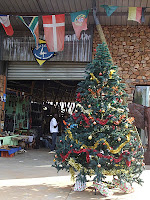 First there was the individual letters...52 of them sent in March, which prompted an initial response from less than half the people I sent them to, some replied on face book, some sent emails and a few sent letters. (postal system is a bit crap here, so I gave many the benefit of the doubt) then there was the request on twitter for pen pals and the response was brilliant. Letters started coming in and were coveted, re read and replied to immediately.

I boycotted face book for a few weeks and sent everyone an email to say that I found facebook not to be personal enough and while it's great everyone loves to hear about what we're up to, the point was TELL ME, not other people. That's why I love twitter, you get a response, you chat with someone about anything and everything, you DM, you move to email, you get requests from people to add more to the blog. I love how interactive it is.

Well the response I got from the email was mainly limited in relpy to friends off twitter, a few other 'old' friends responded to the email, but they were the ones that had written back in the first place.

So my last option is the round robin letter in the christmas card, another 52, I shall personalise them of course, ask questions about work, children and family life so there is something to reply to and this afternoon I'm off to get the annual family picture developed to include in each and every card.

I'm desperate for communication from 'home' it is often the highlight of our week to receive a letter even if it just says, 'nothing much doing here' it shows they care, we are missed and my efforts are appreciated.

So no response to my efforts, means there will be no further effort from me and I'll leave them behind, even if they are family.

December 2011 A A year on, wow, it has gone really fast, both the boys have now completed their first school year in South Africa, with Dan going into Matric in January, this is Grade 11 & 12, equivalent to A levels, but instead of 4 subjects he continues with all his options and grading for university has already started. Alex moves into senior school (for the second time, it’s graded differently here) and is looking forward to some of the more practical lessons, stage production, CAD, music technology. Peter is settled with his job and travelling as much as usual, no longer far flung places but only 2-3 hours by air.
It is most peculiar to be sat writing a letter dated in December and thinking about Christmas in 30c, wearing shorts and t shirts and even more strange to see all the Christmas decorations up in the shops and malls and all the same as the UK, snow scenes, Christmas trees with tinsel and baubles and hundreds of fairy lights, I had hoped for something different, but not sure what really.
I’m now working, voluntarily at a home for abused children under 4 and I’ve been collecting and handing out with Santa Shoebox for children who are orphaned and disadvantaged, all those years we donated boxes to various schools in the UK and now I’m actually getting to hand them out to these kids in Africa, it is actually a very humbling experience.
I’m back in the UK now with the boys for 3 weeks, we return to South Africa on the 20th December, finances, time and transport is limited, if I don’t get to visit this trip there is July and August next year.
The postal system isn’t the best here, in fact not a lot gets past customs, unless it is sent via recorded delivery or is in a A4 envelope marked ‘printed papers’ with a return address on the back. And that is both ways. So please drop me an email, if you have sent a letter or anything else to us that we haven’t acknowledged you for, it may be we just haven’t got it yet.
Hope you have a fab Christmas and look forward to hearing from you in the New Year. Kids want me to cook a traditional dinner but in this heat I think their luck is out.
Love Suzanne, Peter, Dan and Alex.
Posted by chickenruby at 10:15:00