The one where i just pop to the shops

Honestly the horror stories I was told prior to moving to South Africa, just up the road from Johannesburg in Centurion, over looking Super Sports Cricket ground.

Anyway I didn't think I'd be able to go anywhere, thought I'd have to make sure we had everything we needed before sunset or we would have to wait till the morning to go out and buy milk etc.

I couldn't have been more wrong. Take the last 24hrs for example.

School run at 7am as the workers are arriving from Mamelodi and Tembisa. 100's of people literally pouring off the train. Back at 9.30am to collect eldest then return him at 12pm. I then headed off in the general direction of Sandton to Lone Hill for a tweet up. As I drove down the R511 past Deipsloot a large township, my only concern was for the taxi's that seem to have a mind of their own when driving. Following basic instructions on a SMS, I turned right after leaving the mall, right again and 2nd right and tah dah I was there...not a Sat Nav or GPS in sight. The traffic was really heavy when I left, so turning left, then left again I returned to the N14 via the R55.
I was quite proud of myself.

I called in at the Mall for flowers and chocolate, then waited at the school for the kids to finish. Hubby called in via the chinese takeaway and then I returned the eldest to school. I stopped for Petrol at the BP garage as there was a price increase as from today and then back out at 8.30pm, in the dark to collect eldest from his social evening.

This morning was school run, then school run again, popped to the shops for steak and the post office, took kids back to school for hockey, nipped in at KFC for a latte. 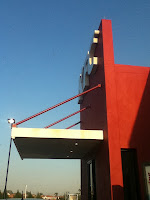 It's getting dark soon, the youngest is out round the estate with his mates, hubby is driving home from Polokwane. I have to get the eldest at 7.30pm and then friends are coming round for a birthday tea (friend's birthday). Alcohol will be consumed.

Tomorrow I'm heading off to Badplaas about a 3hr drive North East to go camping for a few days with the kids.

The only hassle and the only thing no one told me about was that when you go out you need your driving licence and passport at all times, because if you get stopped by the police (and we have many times) it's a long painful process down the police station and you can't get into any other security estate without them.
Posted by chickenruby at 19:41:00