How I'm grieving one year on since my fathers death

I thought we'd got through all the 1sts since my father died suddenly on July 11th last year, until my birthday on June 26th, the moment my mum walked into the coffee shop that morning. Last year my father was with her. Of course there is still the anniversary of his death to get through and then the funeral 2 weeks later. Then we're done or are we?

For me, my start to the summer is mimicking last years UK trip. Helping the teen find somewhere to live, visiting child 4 in Belfast to say good bye before his overseas posting and typing up 1000's of names on a data base for a charity in South Africa. Mum and I even visited the Speech House for afternoon tea where I took this photo. 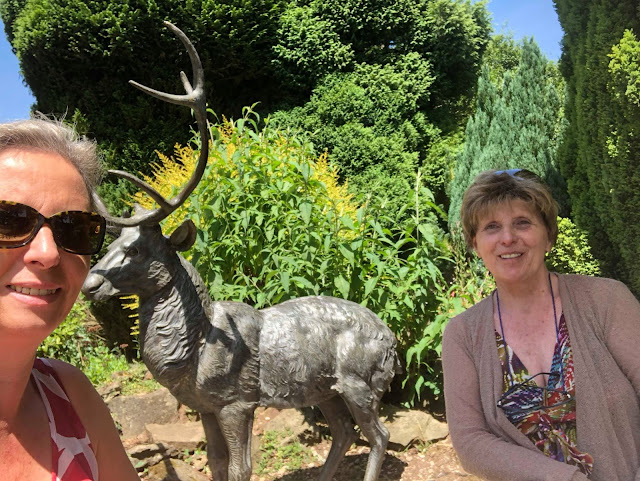 The same place this one was taken 3 days before my father died. 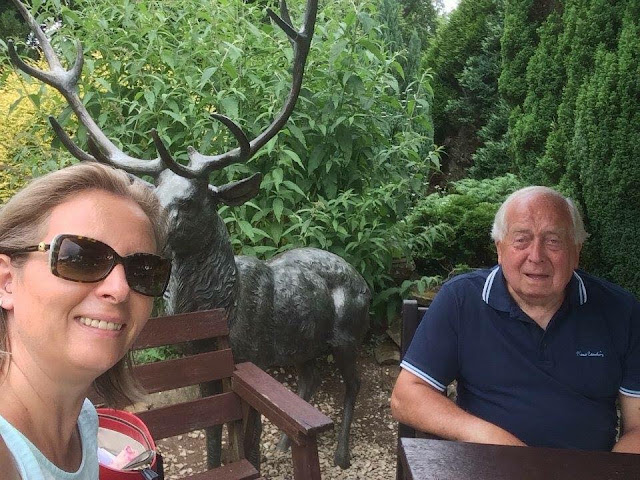 As an expat my greatest fear was not being able to be there for my parents and my children should there be an emergency and not being able to get there in time to say our last goodbyes. Travelling for nearly 20 hours back in 2012 from South Africa with no way of communicating was traumatic, not knowing if by the time I arrived at the hospital my father would've have survived his surgery or not.

After that trip, every subsequent trip I made then became my most feared trip. As much as I enjoyed the time with the family, the moment I arrived I was fully aware that I was already dreading the goodbyes, the last hugs, the last kisses and the last words, knowing that at some point in time and soon, I would be coming back to the UK with the full knowledge that my father would no longer be there.

My father was a very opinionated man and ran commentary on every situation in life, he would wind me up to the point of an argument, with neither side backing down. We both viewed the world as explorers, we shared a love of sport, particularly football, but we viewed life from different vantage points, his mostly from the 'good old days' mine from the present.

The last few weeks of my fathers life were special, we talked so much, we did things together, we always did, there were arguments of course during that time, but I have no regrets, no words left unspoken, no words spoken regretted.

On the night my father died, I said to the teen 'come on we're going to Nanna and Grandad's, be a good grandson and come with me' my niece was there with her 3 boys also. We had a drink and my father started on one of his favourite topics, yet rather than have an argument I just simply said 'I'm not doing this' we said our goodbyes, nicely and left. 3 hours later, I was back sitting at his side as he lay in the hallway, waiting for the paramedics to arrive.

That night I sat with him, I was relatively calm, I knew there was nothing I or anyone could do. When the paramedics took over I collapsed, I couldn't breathe, I phoned my husband and a friend. I stood on the street with the neighbours, then I spent several hours going over all the details with the police as it was a sudden death at home.

The following days I didn't wash, eat or sleep. I couldn't talk to anyone without gulping huge intakes of breath. I walked round the town asking in my head 'why are you smiling? don't you know my father just died' It's a small town and I wasn't able to go far without someone offering their condolences, many times I held it together, said 'thank you' often I fell apart, leaving people staring at me blankly not knowing what to say or do.

All of a sudden I went from saying 'my father died last night' to 'last week/month/year' Mum moved during this period. I returned back and forth to my home in Dubai. My father was a hoarder, thankfully everything was labelled, but trying to sell it all has been a battle. A challenge I've accepted, willingly. I shout at him for leaving me all this crap to sort/sell/donate/throw. I look through his things and wonder why he never showed me this stuff when he was alive. I get angry with him for leaving us like he did. I get emotional, I cry. I can't watch the World Cup without crying, or pass merchandise in the shops without automatically wanting to buy him something. I can't attend a sporting event without getting upset, as he'd be back at home trying to spot me on the TV, while mum relayed the information via face book. I can no longer argue with him, tell him he's wrong and I miss all that.

But as time has gone on, I cry less, but I never stop thinking about him, good or bad. I cried as I wrote this sitting in a coffee shop in Belfast, people were looking at me, I didn't care. Because I fear the day that I don't cry for my father, the day I no longer shed a tear.

There are days, whole days when he doesn't enter my thoughts, but they are rare. He'd be so proud of the teen with his new job, he'd be excited for child 4 as he heads off on another tour with the army, he was so excited when child 3 told him he was going to Australia a couple of weeks before he died, he'd be so looking forward to seeing him come back in October for a visit. He missed child 2's wedding last month.

He's missed by us all, he'll never see Thing 1, 2 & 3 grow up, his great grandchildren, or the great children my mum will get to know. Thing 1 who is 4 said to me the other day 'My grandad died, your daddy died, do you miss him? I do'

This is the post I wrote marking the end of 2017. Managing grief 5 months on.
Although i am not my mother's carer, I do need to support her with stuff while she adapts to life on her own after 53 years of marriage. Living in a different country is challenging and our story appeared in the Daily Mail, you can read about it here.