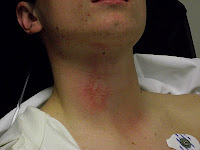 My experience of a cricket ball hitting me in the neck.